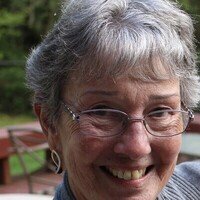 Bronyte (Bonnie) Peterson passed peacefully April 23, 2021 after a brief but tenacious battle with dementia. Bonnie was born to Andrea diSessa and Bernice Pivorunas diSessa in Brooklyn, NY on July 3, 1944. Her family moved to Colorado when she was a child, and Bonnie grew up mostly in Edgewater, a suburb of Denver. She graduated from the University of Colorado, Boulder in 1966 with a B.S. in biology. After graduation, she moved to Seattle and spent the rest of her life in Washington state living in Auburn, Lake Tapps, and Tacoma. In Seattle, she participated in an early experimental educational project producing weekly television programs to teach biology to gifted and talented children. Bonnie continued to teach biology in Washington public schools for almost three decades including both the Federal Way and Seattle School Districts. Bonnie was an excellent tennis player and also coached H.S. tennis. She was an artful collector of glass and ceramics. She was an avid traveler throughout the United States, Europe, China, and on safari to Tanzania, Kenya, and India. Bonnie also loved her Bridge nights with friends. Bonnie was devoted to her family. She would crisscross the country to attend milestone family events, and she delighted in her sons’ and grandchildren’s activities and accomplishments. She was the person who would always show up to cheer you on or help you out. All those who loved her will miss her easy smile, her intelligence, and her warmth. Bonnie is survived by two sons, Devin Proctor of Olympia, WA and Darren Proctor of Lake Tapps, WA; three grandchildren, Logan, Kaitlyn, and Madeleine; and a brother, Andrea A. diSessa of Berkeley, CA. No service is planned to ensure everyone’s safety during the pandemic. In lieu of flowers consider a donation to the Federal Way School District School Supply Fund or the United States Tennis Foundation.