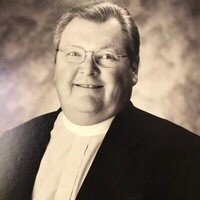 David Elmer Monsen was born April 9, 1946 in Oak Park, Illinois to Olga and Elmer Monsen. He spent his childhood in Glen Ellen, Illinois, graduating from Glenbard West High School in 1964. He then matriculated at Pacific Lutheran University in Tacoma, WA, from which he graduated in 1968. While at PLU he met Linda (nee Osmundson). They married June 8, 1968 in The Dalles, Oregon at Zion Lutheran church where Linda's father, the Rev. Art Osmundson, was pastor and officiant at their wedding. David worked as a news director at the NBC affiliate, KHQ, in Spokane, WA. Both of their children were born in Spokane, Michael Jon in 1972, and Andrew David in 1974. In1976 David began his seminary studies at Pacific Lutheran Theological Seminary in Berkeley, CA from which he graduated with a Masters of Divinity. David was ordained as a pastor in 1980. He served pastorates at Emanuel Lutheran, Yelm WA; New Life Lutheran in Helena, MT: and Galilean Lutheran in Ocean Shores, WA. David and Linda moved to Hoquiam, WA while he completed study and training at St.Peter's Hospital, Olympia, WA for certification in the Washington Association of Chaplains and from 2003 to 2013 he served as Director of Pastoral Care at Grays Harbor Community Hospital in Aberdeen, WA. He also served as the Chaplain for Hospice in Grays Harbor and Pacific counties. After retirement he served as Interim Pastor at St. Andrew's Episcopal church in Aberdeen and at Saron Lutheran Church in Hoquiam, WA. David and Linda made one final move in January, 2016 to Auburn, WA to be closer to family. David continued as supply pastor to several churches in south King County and Pierce County until his diagnosis of Alzheimers in 2018. He entered Hospice care in September 2020, and on January 21, 2021, while at home, he passed into the waiting arms of the Lord he faithfully served all his life. David is survived by his wife of 52 years, Linda; his children, Michael; Andrew (Tia); his brother, John (Chris); his grandchildren, Grace Monsen; Ryan Monsen; and Max Monsen, and numerous cousins, nieces and nephews. Funeral and burial arrangements are pending COVID-19 restrictions. Memorials may be sent to: Grays Harbor Community Hospital Foundation at 915 Anderson Dr. Aberdeen WA 98520 or Franciscan Foundation Hospice Care at PO Box 1502 Tacoma, WA 98401