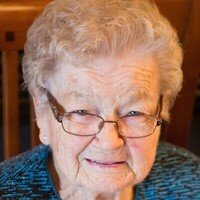 Helen Hardin (Larson), went to be with her Savior early in the morning, April 18, 2021. She was born February 1, 1927, in Seattle, Washington to Emma and Ole Larson. She grew up in Seattle with her four brothers (Gordon, Russell, Howard and Richard) and graduated from Cleveland High School in 1945. She met her husband, Ray, in 1946 at Bob’s Restaurant in Georgetown where she was working while attending the University of Washington. They married August 29, 1947 at the Immanuel Lutheran Church in Seattle. They bought their first home in Chelsea Park (Burien) where their daughters, Kathy and Karen, were born. In 1950 they decided to move to the country and bought property on Lea Hill in Auburn. The summer of 1953 they took their girls to the small home Ray built himself. In the early 60’s they had a larger home built where they remained until 2005, when they downsized and moved into an apartment at Kathy’s. As the girls grew, Helen worked part time and later hired on with Boeing. She retired in 1989 after 25 years as a camera operator. Family and friends were important to Helen, and she was a caregiver. She was interested in everyone’s story. Over the years she and Ray helped raise several family members. She loved working in her flower gardens and camping. Helen and Ray enjoyed several winters in Arizona in their fifth wheel with friends they met there. When she wasn’t outside she loved to bake, crochet, knit and quilt. Her grandchildren and great grandchildren brought her an enormous amount of joy. She loved to visit with them and kept track of their activities. Helen is survived by two daughters, Kathy (Gary) and Karen; four grandsons, Ryan (Brenda), Rory (Leslie), Ross (Briana) and Jonathan. She was also blessed with 8 great-grandchildren, Blake, Cade, Cole, Caleb, Anna Sofia, Eliana, Scout and Vale. Private interment will be held at Tahoma National Cemetery on Friday, April 30, followed by a Celebration of Life Service at New Day Christian Fellowship in Auburn at 3pm, where Helen and Ray enjoyed attending for many years. A video of the service will be available on the New Day Christian Fellowship website later in the day at https://www.newdaycf.org/ In lieu of flowers, donations may be made to Valley Christian School in her name at http://www.valley-christian.com/