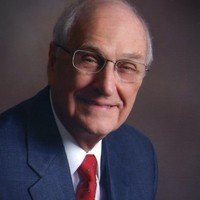 Gayle was born to Beulah and Merle Barrow on October 29, 1939 in Brooks, Minnesota. He passed away March 31 in his Federal Way home. He was 80 years old. A funeral Mass will be said privately at St. Vincent de Paul Catholic Church in Federal Way. Burial will be at Gethsemane Catholic Cemetery. Gayle was raised in Portland, Oregon and graduated from the University of Portland in 1961 receiving a bachelor degree in Engineering Science. He was hired by the Boeing Company out of college and began his aerospace career. Gayle was quite the Sci-Fi fan so working on space programs was right up his alley. He was an expert in space navigation, guidance and control and a member of the Boeing Aerospace Technical Staff. His career spanned 40 years and included the Lunar Orbiter from 1960-1969 (his favorite), SOFT during the 1970s and finally the International Space Station from 1994-2000. Gayle retired on February 28, 2000. He moved back to Federal Way from Houston, Texas at that time. Gayle loved to travel, be it by cruise ship, air or car, seeing new places and experiencing local food and customs. He was quite the chef and enjoyed watching cooking shows on TV and cooking up amazing dishes; but his favorite thing by far was Sci-Fi in any form. Gayle had the heart of a servant attending to both his mother and father during their lives and at their deaths. He was generous and faith filled, always ready to serve. For it is in giving that we receive; it is in pardoning that we are pardoned; and it is in dying that we are born to eternal life. Gayle is survived by his best-friend and long-time companion, Mary Noia, his sisters Connie Whitmarsh and Renee Cik, 9 nieces & nephews, and 24 grand- nieces and nephews. He was very close with all his extended family and shared holidays and special celebrations with them. His caring heart and warm spirit will be greatly missed. Memorial donations can be made to: The Museum of Flight, St. Jude Children’s Research Hospital, or St. Vincent de Paul Catholic Church Donations websites: The Museum of Flight: https://www.museumofflight.org/Giving/donate St. Jude Children's Research Hospital: https://www.stjude.org/promotion/impact-giving-pm.html?sc_dcm=269369863&sc_cid=kwp75473&source_code=IIQ190721002&gclid=CjwKCAjw4KD0BRBUEiwA7MFNTZZVpiIo_rp9NNdXDSMReyt-BlGYWJrTEWwHo5lWULvsJhu2gpXXsRoCN0YQAvD_BwE St. Vincent de Paul Parish: https://www.stvincentparish.org