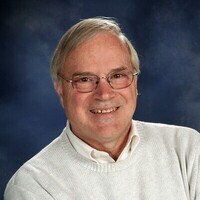 Ron Linebarger, 72, of Kent, WA passed away peacefully on August 7th, 2020 after a battle with brain cancer. Ron was born September 8th, 1947 in Seattle, WA. Ron graduated from Highline High School in 1965, where he began dating his future wife, Sally. He attended the University of Washington, earning a bachelor’s and master’s degree in math education. Ron and Sally married in 1969 and moved to Kent to begin their teaching careers. For 27 years, Ron taught high school math and physics at Kentridge and Kentwood High Schools. Countless students spoke highly of his thorough grasp of the subject matter, instructional skill, and infectious sense of humor. He led the math department for 15 years, one of many leadership roles he handled with ease. He also coached tennis and cross country, which were passions he pursued throughout his life. Ron transitioned to a second career in real estate, which he continued until his passing. Referrals and repeat business always came Ron’s way due to his honesty and ability to successfully educate and guide his clients. Ron loved the outdoor opportunities that the PNW offers: hiking, mountain climbing, skiing, tennis and running. He summited hundreds of peaks in Washington’s Cascade and Olympic Mountains in his early adulthood. In 1968, he made one of the earliest ascents of the Grand Wall in Squamish, BC, which was the highlight of an impressive climbing resume. He ran six marathons among many other races. The tennis community was an important cornerstone of his life. He was an accomplished competitive tennis player, winning numerous USTA team events and tournaments. Ron lived his life by making grand and ambitious plans, then carrying them out with confidence and skill. He was a very supportive and loving husband, father, and grandfather; a respected leader among his tennis, real estate, church and teaching communities; and an active member of Kent Lutheran Church. He will be deeply missed by everyone fortunate enough to have known him. He is survived by Sally, his wife of 51 years; two children, Tara and Kyle; and seven grandchildren. Donations in his memory can be made to Kent Lutheran Church or Fred Hutch Cancer Research Center. A memorial service will be held when friends and family can gather safely to celebrate his life and many accomplishments.