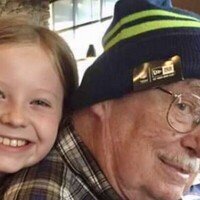 When he was 76, Dad told his doctor he wanted to live long enough to see his granddaughter graduate high school. She was three at the time. She’s now a freshman in high school, so he almost made it. He lived to see three grandsons through high school, and the youngest reach kindergarten. Dad loved God; his country, which he served in the Air Force; his birthplace of Kentucky; and his transplanted home in the Pacific Northwest. He lived a quiet life. Having grown up during the depression, he liked the simple things, like generic cereal, steamed vegetables, fresh fruit, and peanut butter mixed with grape jelly that he called lom-golly. Dad preferred to stay in the background, but he would step up when he was needed. Friends and neighbors remember him as the one who would give them rides to church, teach Sunday school, help out with youth ministry, and even step up as interim preacher when our church, Black Diamond Presbyterian, was between pastors. Us kids remember helping dad remodel our house on the Green River, and riding in the back of his old blue Ford truck on our way to go inner tubing with friends. Dad inherited a love of sports from his mother, Kathryn Carney. His favorite was baseball. In high school, he was a left-handed pitcher, and when he wasn’t playing, he was keeping score. His sister Betty remembers that he was so honest that he once contradicted his coaches by notifying them that the opposing team had actually won the game. That’s just how Dad rolled. After he moved to Washington state, he was dedicated to the Mariners, no matter how many times they disappointed him. He knew all the players’ names and stats. He and his son Chris loved to “talk stats”, which was a foreign language to the rest of us. Dad was proud of Chris’ performance as a pitcher, even keeping his Little League trophies until his death. Besides baseball, Dad loved to read and research about history and genealogy, showing a lively curiosity and keen intellect right up to the end of his life. Dad was quiet until you got to know him, and then he would happily tell you stories, about his interests, his family, and his life. One accomplishment that he didn’t talk much about was working with the Apollo 11 team. He helped send men to the moon using a slide rule, but he would never brag about it. Dad was more proud of the fact that he had broken his nose several times as a child. One time was from riding his red wagon down a hill in Madisonville and crashing into a tree, but there were lots of similar stories. Dad is survived by his wife Barbara, daughters Liane Dahlke and Gail Orsillo, and son Chris Carney, along with grandsons Ethan, Kyle, and Asher Dahlke; Brendan Orsillo; Conall Carney; and lonely granddaughter Aidan Rose Orsillo. His extended family is spread out all over the U.S, including older sister Betty Ruth Seawright and family in Texas, and younger brother Tom Carney and family in California. He will also be fondly remembered by many friends from Black Diamond Pres, The River senior park, and the Auburn Senior Center. If you have fond memories of our dad, you can honor him by doing a kind deed for a neighbor, reading a book to a child, having a friendly conversation with someone who doesn’t look like you, giving generously to someone in need (he particularly liked donating to World Vision or Heifer International’s animal programs), patronizing your local library, or learning something new. Kindness and generosity brought joy to his heart.