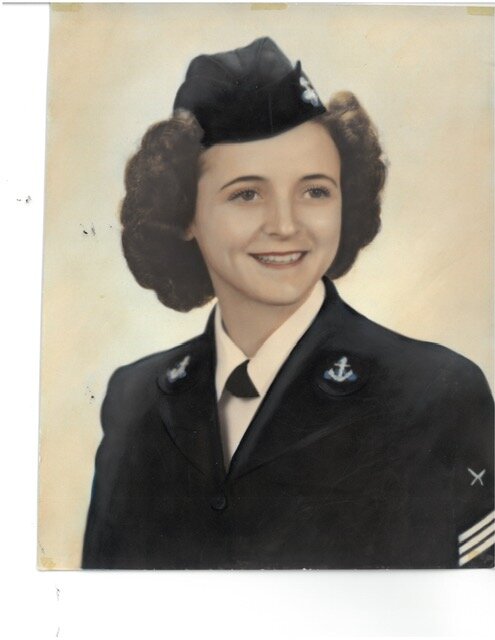 She was the middle child born to Frank and Esabel Gomes on Christmas Day,1924. She spent her first 20 years in the small town of Tulare, California, known for its dairy farms and agriculture. She was born to immigrant parents from the Azore Islands who spoke little English. Her father passed when she was 5 years old so at a very young age our mother and her siblings picked cotton and grapes to help make ends meet.

Our mother always valued adventure and experiences so at age 20 during WWII she enlisted in the Navy WAVES, the Naval organization that women could join at the time. She left Tulare by train in March,1945 on a 3 day and night trip bound for Hunter’s College in the Bronx. She was a patriot all of her life and chose to be buried in her Navy uniform that she had saved all of these years.

She was discharged from the Navy after WWII was over as women were not legally permitted to continue in a Naval service after the military men came back from their overseas locations. Her last duty station was Seattle, and she chose to stay in that area.

She started her 70 plus years in Seattle where she married our father in 1949 and had 5 daughters in 8 years. She was a full-time mother during this period. She loved the community of Magnolia having lived in only two homes within 8 blocks of each other during those years.

As her children grew up, Angie had more time to expand her horizons. She developed a mean game of doubles tennis played on the local tennis courts which she enjoyed well into her 80’s, often winning games played against women half her age. She was also very active in Our Lady of Fatima Church and started the first bazaar to raise funds for the school.  She was a consummate volunteer.

She loved travel anywhere and everywhere and visited places ranging from Australia, Hawaii, China, Brazil and Egypt where she developed a fascination for King Tut. She also traveled to 3 of the Grand Slam tennis tournaments, some multiple times. Dance was a passion since her teenage years when during WWII the USO held dances near Tulare for the cadets stationed at a military training academy nearby.

In her later years she enjoyed the sunroom in her home where she could channel the first 20 years of living in California. She left California but she never left her love for the sun. During her last summer she spent many non rainy evenings having dinner al fresco at various places facing Puget Sound eating favorite foods and enjoying beautiful sunsets. She enjoyed her life to the fullest including her last day.

In lieu of flowers the family suggests donations to the Women in the Military Memorial in Arlington, Virginia or Catholic Community Services of King County, WA which provides for services to the elderly to remain in their homes with dignity.

Special thanks on our mother’s behalf to her helpers in her final years. They became her friends.

Please be kind to an elderly person today, it will lift their spirits.

To send flowers to the family or plant a tree in memory of Angie Klontz, please visit Tribute Store

Share Your Memory of
Angie
Upload Your Memory View All Memories
Be the first to upload a memory!
Share A Memory
Send Flowers