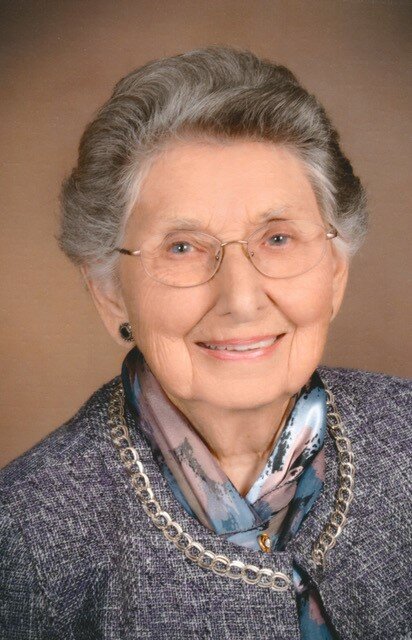 Elizabeth “Betsy” Haas Henderson passed away peacefully on June 22, 2022, at the age of 101, at her retirement community in Auburn, Washington. She was born Elizabeth Regina Haas on March 29, 1921, in Ann Arbor, Michigan. Her parents were Herman and Ida (Braun) Haas. Betsy was baptized, confirmed, and married at Zion Lutheran Church in Ann Arbor.

Betsy is preceded in death by her parents, her brother Christian Haas and her husband Everett Henderson. She is survived by her four children and their spouses, Donald and Suzanne Henderson of Los Angeles, California; Barbara and Roy Allen of San Rafael, California; James and Ruthanne Henderson of Kent, Washington; and Philip and Jenney Henderson, of Allentown, Pennsylvania. Betsy is also survived by grandchildren Sarah Northrip and husband Timothy, Lorene Henderson, Kristiana de Leon and husband Andrew, Jocelyn Henderson, and Robert Allen; great-grandchildren Alexander Northrip and Andrew Northrip; and many other extended family members.

Betsy grew up on her parents’ farm, attended University High School in Ann Arbor and was a member of the 4-H Club. Her 4-H projects included caring for and exhibiting a lamb at the county fair when she was 16 and completing a clothing project that included designing and sewing a skirted suit at age 18, for which she won a prize at the county fair.

Betsy graduated from the University of Michigan in 1943 with a B.S. in Zoology. After graduating, she worked in Midland, Michigan. In 1945, Betsy moved to Pasadena, California, to begin medical laboratory training. After completing the training and receiving her license, she worked at Huntington Memorial Hospital as a laboratory technician. Betsy was happily married to Everett Benedict Henderson from 1948 until his death in 1983. They were married in Ann Arbor, Michigan, and lived in the San Fernando Valley, Los Angeles, California their entire married life. After getting married, Betsy quit working at the hospital to become a homemaker.

Betsy and her family were members of Emmanuel Lutheran Church in North Hollywood, California, for many years. As a life-long Lutheran, she served on numerous church boards and committees and worked on a variety of church service projects, often in a leadership role. She served as a member of the Board of Regents of California Lutheran University in the late 1970s and early 1980s.

In 1995, Betsy moved to Washington State to be closer to friends who had moved there. She was a member of Trinity Lutheran Church in Tacoma, Washington at the time of her death.

Family and friends were important to Betsy. She enjoyed hosting holiday gatherings and other special occasions in her home. In addition to her many other activities, Betsy’s interests and hobbies included sewing, crossword puzzles, gardening, genealogy, baking, oil painting, and traveling. Betsy and her husband Everett were, in her words, “bitten by the travel bug,” after they traveled to Madagascar one summer to volunteer on a project of Lutheran World Federation. Along the way to and from Madagascar, they made stops in Asia and Africa. Since then, Betsy enjoyed traveling extensively throughout the United States and around the world with family members and friends.

To those who knew her, she was a cherished role model of a life well-lived. She will be greatly missed.

There will be a memorial service celebrating Betsy’s life at Trinity Lutheran Church, 12115 South Park Avenue, Tacoma, Washington on Thursday, August 11, 2022, at 11:00 a.m., followed by a reception in the church fellowship hall. On Monday, August 15, 2022, there will be a graveside committal service at Pierce Brothers Valhalla Memorial Park, 10621 Victory Boulevard, North Hollywood, California, at 10:00 a.m.

Memorial donations may be made to the Trinity Lutheran Church Trust Fund; Pacific Lutheran University, earmarked for the Silas and Alice Torvend Endowed Scholarship; or the Holden Village Foundation.

To send flowers to the family or plant a tree in memory of Elizabeth Henderson, please visit Tribute Store

Share Your Memory of
Elizabeth
Upload Your Memory View All Memories
Be the first to upload a memory!
Share A Memory
Send Flowers