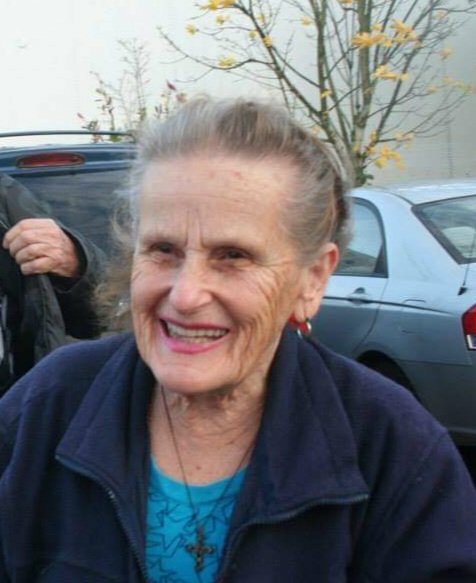 She is survived by her husband, Everett J Penfold whom she married February 6th, 1954.  They had 5 children, Daniel Eugene Penfold, Lenora Ann Penfold, Timothy Webster Penfold, Jefferson Bradley Clark Penfold, Amanda Virginia Penfold, and 15 grandchildren, Heather and David, Andy, Cassie and Steven, Christin, Travis and Kayla, Abigail, Bryce, Colton and 1 on the way. Makayla, Tyson and Mason. 15 great grandchildren so far. She was called Mom and Grammy, by many over the years, not just her blood family.

She is also survived by her sister Norma Lee Clark Penfold West and many cousins, nieces and nephews from both sides of the family.

She was born in Modesto CA, January 22, 1936, grew up in LaGrange CA where she loved to swim in the Tuolumne River and ran the foot hills. She was present at the LaGrange Centennial in 1948 with her family. She went to Oakdale high school graduating in 1954, she attended several of the class reunions over the past 70 years. She worked in the Davis Cannery, planted and packed sweet potato, pruned and picked grapes in Livingston. Picked fruit and vegetables for canning every chance she got. Worked at the family restaurant called Tropical Treats Drive Inn, 1973 in Merced Ca. She also took a few classes at the Merced College on upholstery and rug making. She volunteered at school and many different functions. She loved music, all kinds and she loved to sing.  She loved to crochet and would teach any of the kids or grandchildren that wanted to learn. She cut wool in to strips to make hand hooked rugs.

The family moved to Kent Washington in 1981. She loved road trips, she would travel back to California a couple times a year, pick up the grandkids and go visit the family in LaGrange and around Merced County. Everett and LaVerne made quite a few trips Utah to see family and attend reunions.  She always had snacks in the car so they didn’t have to stop and eat. She would just hand out the big bag of homemade popcorn with lots of butter or jerky.

In Washington her hobbies were junk collecting, genealogy, square dancing with the Swamp Stompers square dancers group and she belonged to a quilting club for several years. She was a novice photographer, always with a camera in hand. She loved to read all books, even children's books. She also loved plants and animals there wasn't a cutting from a plant she couldn't start and a stray animal that she didn't try to help. She loved puzzles and volunteered at the local senior’s center to help and hang out. She stopped driving a few years ago, but still loved to go for a ride. She will be missed.

To send flowers to the family or plant a tree in memory of LaVerne Penfold, please visit Tribute Store

Share Your Memory of
LaVerne
Upload Your Memory View All Memories
Be the first to upload a memory!
Share A Memory
Send Flowers